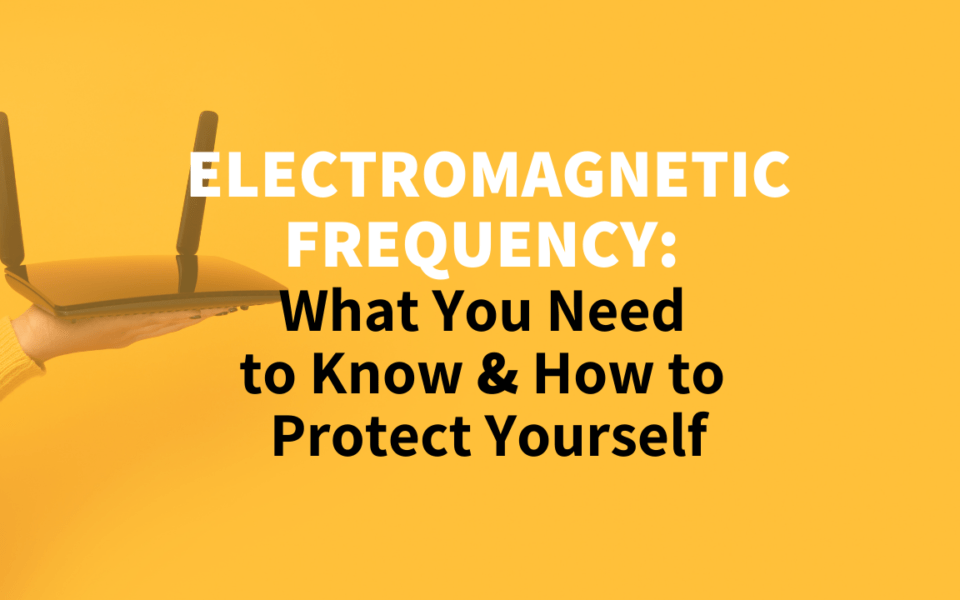 EMF: What You Need to Know & How to Protect Yourself

EMF stands for Electromagnetic Frequencies and in this context we’re talking about man-made, non-native EMF. Yes, there are natural EMFs such as the visible and invisible energy from the sun. There are also natural frequencies and magnetism from the earth.

Some will try to claim that since we’re always exposed to these frequencies naturally, the ones we’re exposed to in the modern world have no significance. Exposure to this radiation has increased by a quintillion times in the last 100 years and increasing every day.

The sheer amount of frequency we’re exposed to nowadays not only has been shown to be harmful by thousands of peer-reviewed studies, but these non-native frequencies affect our body much differently in their pulsations, varying intensities and ubiquitous exposure.

Our bodies were designed to utilize the frequencies from the earth and sun – they were not designed to be able to handle the large surges of non-native frequencies of modern living, without pause.

In the unadulterated natural world, we would have zero body voltage from electrical fields, zero radiofrequency exposure, and zero AC magnetic field exposure. We want to return as close to this as possible.

All biological life is sensitive to EMF. The world’s largest animal study from the National Toxicology Program shows a statistically significant increase in brain and heart cancer in animals exposed to EMF below the ICNIRP guidelines followed by most countries. The $30 million study took years to complete and is the most comprehensive assessment of health effects in animals exposed to radiofrequency (1).

There are more than 1,000 scientific studies conducted by independent researchers from around the world concerning the biological effects. Check the end of this article for a list of a few of them (2).

Let’s not forget the tobacco industry denied and minimized the link between smoking and disease for decades and it appears the telecom companies are doing the same.

If you’ve been trying to heal without much success, EMF exposure could be a major piece for you to look into. Exposure to non-native EMF will exacerbate and/or create the environment for Lyme, mold, gut dysbiosis, cancer, attention disorders, anxiety & depression, adrenal dysfunction and more.

In this article, I’ll talk about the types of EMF and how to reduce your exposure to each.

WHAT ARE THE TYPES OF NON-NATIVE EMF?

You may see products mentioning low/zero EMF – but the tricky thing is, which EMF? There are several and each has its own unit of measurement. One company can say it’s low/zero EMF simply because it has lower magnetic fields, however what about the electric fields, how about the dirty electricity, any radio frequencies?

Let’s talk about some different types of EMF in our current world.

Non-native magnetic fields can be found wherever current flows – measured in mG (milligauss).

Nothing can really be done about magnetic field levels above 1-2 milliGauss that are being picked up inside the home. Shielding does not help with this, even if you slept in an EMF shielding canopy or bedroom, that will not shield you from those magnetic fields.

— The best way to reduce magnetic fields is to increase distance from the source/appliances/powerlines.

— Don’t sit/sleep on an adjacent wall where a fridge or large appliance is located.

— Don’t use a laptop on your lap, it gives off a large magnetic field penetrating into the body.

AC electric fields are usually measured in volts/meter (V/m). Anything that uses electricity can and will give off electric fields, particularly when it’s ungrounded. This happens even when switched off, if simply plugged in.

An electric field pulses 120 times a second. This impacts our cells. It impacts mitochondria. The polarized field causes a strong stressor. It disrupts metabolic processes and disturbs sleep. The higher the electric field levels are, in a bedroom in particular, the bigger the issue. Electric fields, as well as artificial lighting, in the evening will disrupt melatonin production and limit capacity for deep sleep (more on lighting later).

— Keep appliances/phones/TVs unplugged when not in use.

— Do not sleep with things plugged in around you. Unplug everything.

— Best to simply turn off the breaker to the bedroom so no pulsing electricity in walls.

— Make sure the appliances/devices near you are using grounded cords (three-prong).

In the US, the FCC has set safety limits to a so-called “safe exposure level” at 1 milliWatts/centimeter squared (mW/cm2) which converts to 10 million microWatts/meter squared (uW/m2).

The rest of the world has a much more stringent unit of measurement, the microWatt. Several other countries like Italy, Russia, Austria and Switzerland are 100 -100,000 times more stringent than the US.

One study showed an increased incidence of glioma and malignant schwannoma in rats exposed to radiofrequency radiation (3).

Another, reviewed 100 studies investigating oxidative effects of low-intensity RF radiation in living cells exposed to just 2,500 μW/m2 and found it could increase oxidative stress in the cells (4).

In a meta-analysis, they found extra low frequencies may increase the risk of human breast cancer as well (5).

— At minimum turn off wifi while sleeping.

— To shield from RF coming from outside the home, you have to use a proper shielding canopy, or properly set up a shielded bedroom. This can cost $2,000 – $4,000 depending on size.

— Turn off the phone when not in use, airplane mode, or off completely.

— Never use or keep the phone close to body or head.

DE comes from dimmer switches, certain LEDs and compact fluorescent lamps (CFLs). It’s a problem in front load washing machines, solar panels and energy-efficient furnaces. Dirty Electricity is a problem, but it would not be the first problem to address for most people. Addressing magnetic fields, radiofrequency, electric fields and lighting are likely more of a priority.

— Can get a whole-house filtering system installed at the breaker box, Super Power Perfect Box, which will not only solve the DE problem it will make your electrical more efficient thus lowering the electric bill.

— Simply plugging in Stetzer Filters into your outlets to reduce DE like some suggest, is not a great solution. It is incomplete and can often cause other issues.

Due to the modern world, we have created a severely unnatural environment, one that allows us to stay up late working on our screens and basking under artificial light. This is one of the biggest stressors of the body there is. It can drastically affect our natural diurnal rhythms leading to sleep disturbances, anxiety, brain fog, fatigue and more.

The 2 big issues with artificial light is the spectrum it has (mostly blue) and also the flicker that is always happening even though you can’t consciously see it. Both of these are of great stress to the body.

Our circadian rhythm is entrained with the sun which does have blue in the spectrum, but that dissipates as the sun sets.  Ancestrally, our only source of light was from the sun, fire, lanterns and candles. Now, with the widespread use of blue light, we are causing a lot of issues for ourselves. Every time you look at a bright screen or phone you’re triggering your brain to think it’s daytime.

A 2018 study concluded that participants exposed to higher levels of blue light had a 1.5 and 2-fold higher risk of developing breast and prostate cancer, respectively, as compared to the less-exposed population (6).

— Try to mimic what’s going on outside in the natural world in your home.

— Use a blue light blocker application (Iris or F.lux) for all your computer/laptop/tablet screens including cell phones.

— Use blue-blocking glasses when you’re working on the computer or under any artificial lighting. There are only a few brands that are actually tested by EMF experts I trust so quality really matters here. Can buy a pair for 15% off here. Use code DETOXDOC.

I can’t write an article on EMF without touching on 5G. This topic is too vast to cover entirely here, but I will leave you with this.

In a January 2017 announcement, AT&T described their plan for future technology deployment. The announcement stated:

“Our 5G Evolution plans will pave the way to the next-generation of higher speeds for customers. We’re not waiting until the final [safety] standards are set to lay the foundation for our evolution to 5G. We’re executing now,”

They don’t care about safety, eh? That’s reassuring. Remember the tobacco industry? They weren’t concerned either.

In order to transmit large amounts of data, 5G will require the installation of base stations in every neighborhood of the world and spaced every 10 to 12 houses. These will be found on street lights, utility poles, bus stops, roofs – you may end up with one right outside your window.

The amount of radiofrequency this technology requires is enormous, added on top of our already high exposure. This is only one of the many issues with it, which is why over 315 scientists and doctors from 35 countries urge to halt the roll-out.

There is no magic supplement, crystal, rock, or neutralizer that will suddenly make EMFs safe. There are only 2 ways to effectively and legitimately address EMF exposure and that is avoidance and proper protection (not quick gimmicks).

Unfortunately, plants, crystals and grounding isn’t enough if one is living among large amounts of EMF. We have harmful influences on our bodies, and we have helpful influences. Grounding, crystals, antioxidants, nutrition will add helpful inputs but they do not remove the harmful stressor. It’s similar to taking an anti-inflammatory supplement, but not removing the source of inflammation in your diet, lifestyle and environment.

Don’t fall for the gadgets to put on your phone to suddenly make them safe. This is a dangerous thing people are doing. They use these gadgets thinking it makes them safe when really they should be simply turning off the phone when not in use and reducing usage in general.

We’re all electromagnetic beings. Our very cells generate EMF. This is the entire basis for EKGs, EMGs and many other diagnostic testing.

The question becomes whether the external EMFs we’re exposed to are congruent and in harmony with our cells, or in disharmony and add ongoing oxidative stress.

The first thing we should do when we are wanting to heal is put down all the devices, get outside and connect with our earth’s frequencies because they are congruent with our own, these man-made devices are not.

©2017-2021 | AskDrSteph@ProtonMail.com
All information presented on this website is for informational purposes only. These statements have not been evaluated by the Food and Drug Administration. This website or its contents is not intended to diagnose, treat, cure or prevent any disease and is not intended to be a substitute or replacement for any medical treatment.